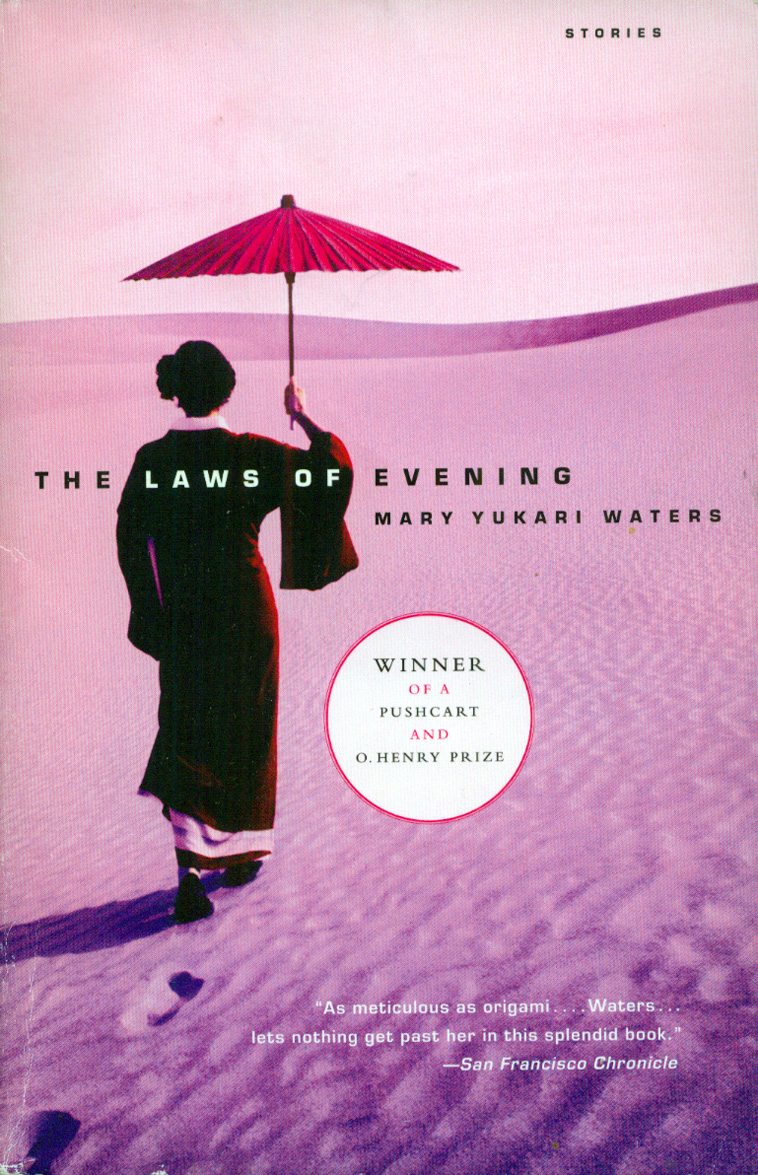 Editor’s Note: This short excerpt from the best collection of short stories I have read in many months, THE LAWS OF EVENING by Mary Yukari Waters, is yet another example of a very small story within the framework of a tradition short story, as well as a beautiful response to that old refrain: “Oh, that’s just a story you’re telling.”

Is there any truth to the story? I ask. — Norbert Blei

That evening, Mrs. Kimura entertained the boys with a fairytale while their parents attended a midsummer PTA meeting. They sat out on the garden veranda—the boys in an after-dinner stupor, their soap-scented skin already moist with per­spiration. “So young Urashimataro descended to the bottom of the sea,” she said, “on the tortoise’s back. The water around him changed from clear to light green, then darker green, and then a deep midnight blue.” She batted away a mosquito with her paper fan. The sun had just set, and strokes of pink and orange stretched across the sky as if drawn by a half-dried brush, revealing behind its gaps the milky blue of day. “Soon they reached the underwater kingdom.”

Mrs. Kimura told them how, after a short visit to the Emperor of the Sea, Urashimacaro came back to his village to find with horror that a hundred years had passed. Just then a bicycle passed by in the alley, flashing in and out of view among the slats of the bamboo fence. Saburo, the older one, looked up with sharp interest. “That’s Shizu-kun’s big brother!” he interrupted.

Mrs. Kimura, ignoring him, continued. “Urashimatato walked down the alley,” she said, “but his old house was gone.” Little Terao was listening rapt, his mouth falling open a little. “His old neighbors were gone. All of them . . . strangers.” She looked over her bifocals into Terao’s eyes. Their whites were clear and unveined. Limpid irises, like shallow water—she could see almost to the bottom. Terao must be imagining Urashimataro’s predicament now, the way she did as a child, with the delicious thrill of momentarily leaving the safety of his own world. She marveled at his innocence, at his little mind’s unawareness of all that lay around and above and beneath him. His older brother’s mind, by contrast, was branching our rapidly. But he too had far to go; the expanses of time, of space, of human understanding, had yet to unfold. Mrs. Kimura felt all this vaguely, in the space of a heartbeat.

“He opened the magic box,” she concluded, “and smoke poured out, and suddenly he had turned into an old man with a long white beard.”

The sky’s familiar blue was gone now, replaced by an omi­nous wall of tangerine-pink. In contrast to this incandescence, the veranda below seemed suddenly darker, the boys shadowed and featureless in the twilight. Little Terao was scratching at something on his arm. One flex of her mind . . . and there he was, become her own son as a little boy, sitting before her on the veranda as he had done so many summers ago. It was Jiro she saw now, from a vantage point she had never known as a young mother. With a surge of emotion, she reached out and grasped Terao’s damp shoulder.

In the dusk, Saburo snickered.

By now the color had leached from the sky. The white light of morning, the wheeling crow, was a distant memory. Even the quality of air had changed along with the fading light; she recognized in this evening the quicksilver quality, the shifting groundlessness, of her dreams. And it seemed to her that here was life’s essence, revealed as it never could be in the level light of day.

Saburo snorted. “Of course not!” he said.

[from “Circling the Hondo,” from THE LAWS OF EVENING, Stories, Scribner, 2003]