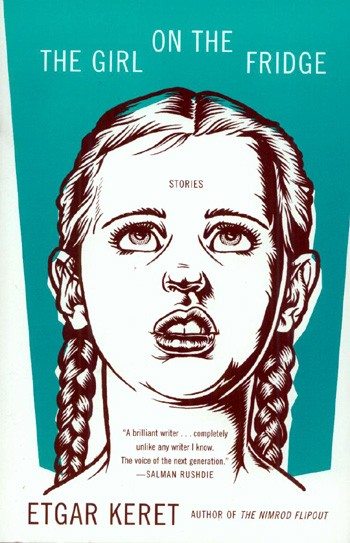 And I asked: “What did you buy that for?”

“Because I need it,” she said. ‘I’ve got lots of things to glue together.”

“There’s nothing that needs gluing together,” I snapped. “I can’t understand why you buy all this crap.”

“The same reason I married you,” she shot back, “to kill time.”

I didn’t feel like getting into a fight, so I kept quiet, and so did she. “Is it any good, this glue?” I asked. She showed me the picture on the box with this guy hanging upside down from the ceiling after someone had smeared some glue on the soles of his shoes.

“No glue can make a person stick like that,” I said. “They took the picture upside down. He’s standing on the floor. They just stuck a light fixture in the floor to make it look like a ceiling. You can tell right away by the way the window looks. They put the clasp on the blinds backwards. Take a look.” I pointed at the window in the picture. She didn’t look. “It’s eight already,” I said, “I’ve got to run.” I picked up my briefcase and kissed her on the cheek. “I’ll be back late. I’m—”

“How come? Is anything the matter?”

“No. I mean, yeah. I think she suspects something.” There was a long silence. I could hear Mindy breathing on the other end.

‘I don’t see why you stay with her,” she whispered in the end. “The two of you never do anything. You don’t even bother fighting anymore. I can’t figure out why you go on like this. I just don’t get what’s holding you together. I don’t get it,” she said again. “I simply don’t get it…” and she started crying.

I got home early. I called out hello when I walked in the door, but there was no reply. I went from room to room. She wasn’t in any of them. On the kitchen table I found the tube of glue, com­pletely empty. I tried to pull one of the chairs out, to sit down. It didn’t budge, I tried again. Stuck. She’d glued it to the floor. The fridge wouldn’t open. She’d glued it shut. I couldn’t see why she’d pull a stunt like this. She’d always seemed reasonably sane. This just wasn’t like her. I went into the living room to get the phone. I thought she might have gone to her mother’s. I couldn’t lift the receiver. She’d glued that down too. Furious, I kicked at the telephone table and almost broke my toe. The table didn’t budge.

Thai’s when I heard her laughing. It was coining from up above me. I looked, and there she was, hanging upside down, her bare feet clinging to the high living room ceiling. I looked at her, stunned. “What the fuck. Have you lost your mind?” She didn’t answer, just smiled. Her smile seemed so natural, the way she was hanging, as if just her lips were subject to gravity. “Don’t worry,” I said. “I’ll get you down,” and I pulled some books off the shelf. I stacked up a few volumes of the encyclopedia and got on top of the pile. “This may hurt a little,” I said, trying to keep my balance. She went on smiling. I pulled as hard as I could, but nothing happened. Carefully, I climbed down. “Don’t worry,” I said. “I’ll go to the neighbors to phone for help.”

“Fine,” she said and laughed. “I’m not going anywhere.” By then I was laughing too. She was so pretty, and so incongruous, hanging upside down from the ceiling that way. With her long hair dangling downward, and her breasts molded like two per­fect teardrops under her white T-shirt. So pretty. I climbed back up onto the pile of books and kissed her. I felt her tongue on mine. The books slipped out from under my feet as I hung there in midair, not touching a thing, dangling from just her lips.

A birthday-party magician whose hat tricks end in horror and gore; a girl parented by a major household appliance; the possessor of the lowest IQ in Mossad—such are the denizens of Etgar Keret’s first collections, the ones that made him a household name in Israel and the major discovery of this last decade.

“Keret can do more with six…paragraphs than most writers can with 600 pages.” –Kyle Smith, PEOPLE