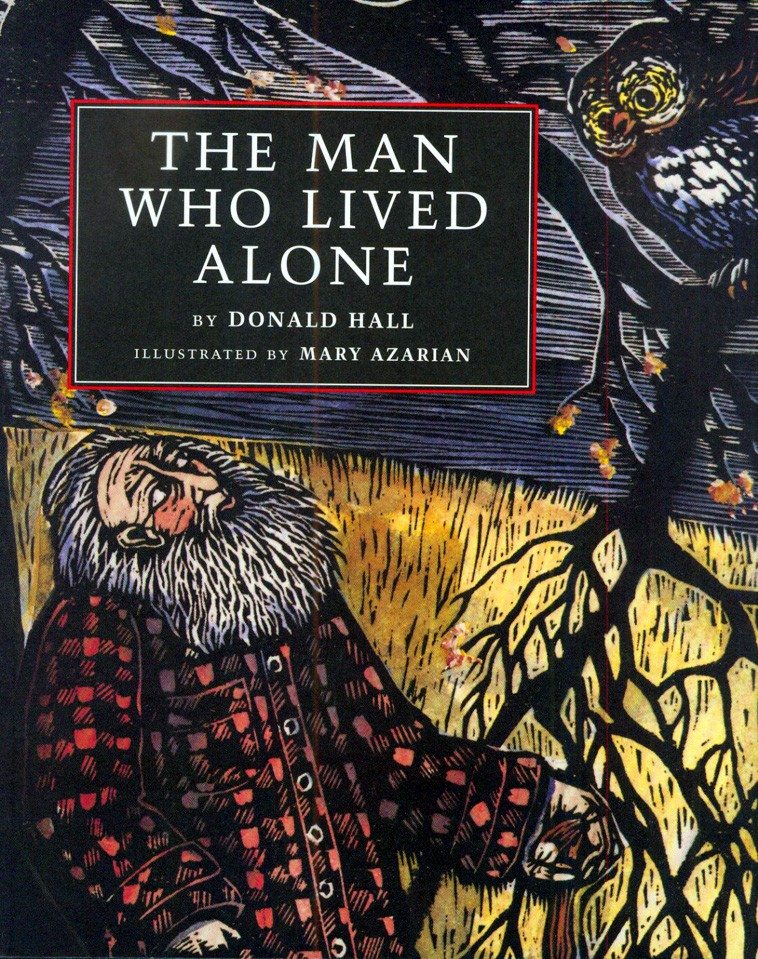 I’ve been reading a lot of Donald Hall lately—his work recently featured in both Basho’s Road and Poetry Dispatch. And here he is again on my site devoted specifically to the story.

I admire diversity in a writer. And Hall certainly touches all the bases: poetry, essays, fiction, memoir, textbooks, children’s books. I will return to all this yet again, perhaps.

But for now, for the sake of story telling/writing, I would like to focus on excerpts from two of his books: STRING TOO SHORT TO BE SAVED (Recollections of Summer on a New England Farm), and his children’s book, THE MAN WHO LIVED ALONE.

The source of story? Something I’ve been hammering away at since the very beginning of this site. Something that should interest every writer in pursuit of the story, the short story, the minimal story, etc. I’ve devoted more than enough thoughts, ideas, examples on the ethnic story as well: the story source found in one’s blood. Here’s a variation on that idea. If you were born or live in the rural…you can no doubt relate to this first excerpt from Donald Hall’s, STRING TOO SHORT TO BE SAVED:

The day had begun warm, end-of-summer, dry with the energy of September, but now the sky to the west had turned gray. The wind shifted, and I turned to look at my grandfather. He nodded. “I fear it will rain on us before we’re done,” he said. “! reckon we can stand a little wet, if we’re leading the heifers home.” I knew what would come next. Rain or the lost heifers would bring to his mind and his tongue some anecdote of the past and he would recount it to me. I don’t remember what it was, this time. His memory was great, and his curiosity, and the two kept his voice active with stories out of his youth and manhood. We could have walked ten years without breaking the links of anecdote or repeating a single one. When we were haying I would try to pitch on while he loaded, so that his breath could be saved for talk. At night in the tie-up while he was milking, he would tell stories or recite long poems he had memorized years before to speak as pieces at the Lyceum. The stories were various and anything might recall them. Walking along the road, he might point out a cellar hole, or distinguish for me in the distance a particular hill, covered with maple now, which his father had cultivated; the recognition would start him on the track of a character or an event. Usually his stories were funny, but they were not jokes. He never began, “There was a man who . . .” but “Once Herbert Perkins…”

I’ve heard stories begin like this here in my rural village setting for more that forty years. “Once Eddie Valentine…you remember Eddie, don’t you?…” (Or Al Johnson, or Charlie Clemensen, or Emma Husby, or Doc Farmer or Wally Mickelson or Winky Larson or..) And off we go. A story in the making.

Here’s another excerpt reflecting the process of this kind of old fashioned storytelling from Hall’s memoir, STRING TOO SHORT TO BE SAVED.” Take particular note of the man Washington Woodward: 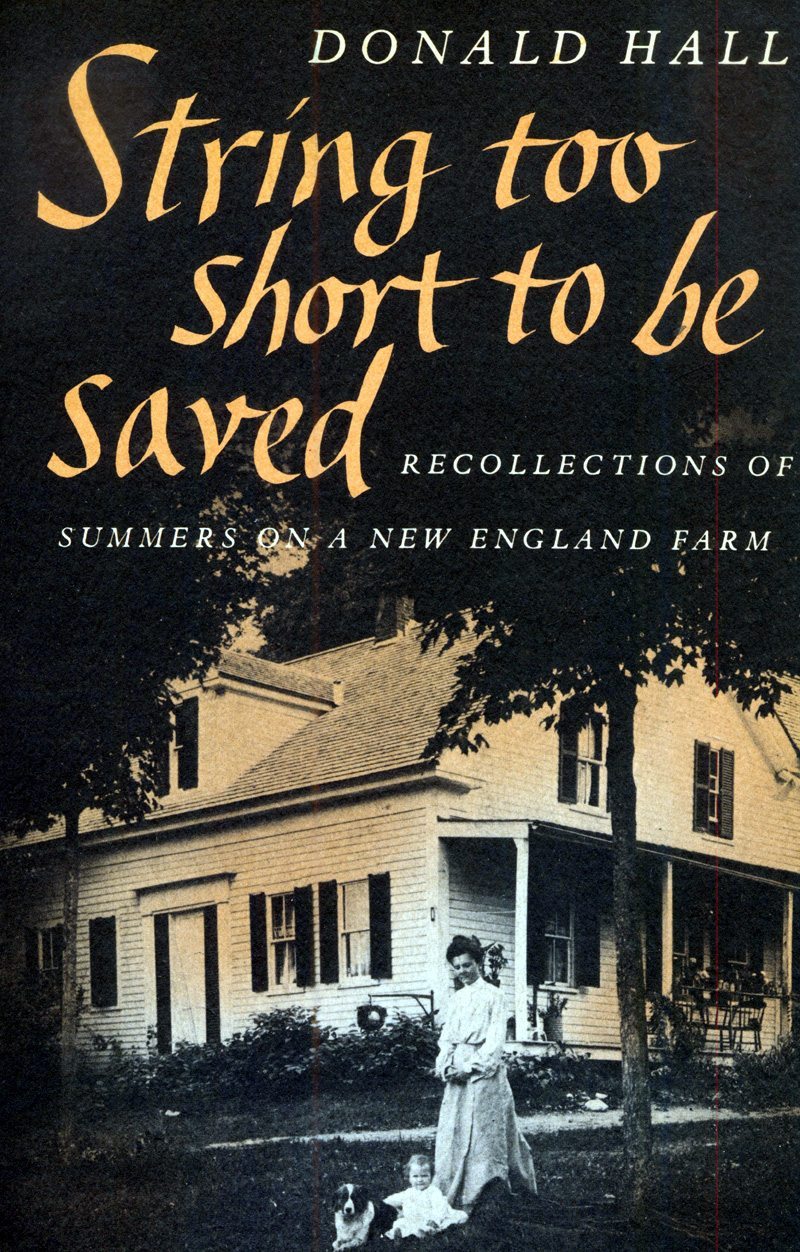 If I grew morbid from company with the dead, it was not my grandfather’s fault. He was interested only in lively stories about them, and he lived so completely in the dramatic scenes of his memory that everything was continually present to him. My grandmother was occasionally elegiac, but not enough to influence me. When I was nine I saw my Great-Aunt Nannie, blind and insane, dying for one long summer on a cot in the parlor, yet my own lamentation for the dead and the past had begun even earlier. Many of my grandfather’s lively stories were symptoms, — to me and not to him, of the decay of New Hampshire; a story might include a meadow where the farm boys had played baseball, or a wood through which a railroad had once run.

I found myself, too, taking some of the characters in his stories at a value different from his. So many of them lived a half-life, a life of casual waste. He often talked about Washington Woodward. I knew Washington well, yet my image of him was a mixture of what I had observed and what my grandfather had told me. The whole farm was composed of things which Washington had made or at least repaired, so there was no end of devices to remind my grandfather of a story about him. Most of them were funny, for Washington was eccentric, yet after I had finished laughing, even perhaps when I lay in bed at night and thought over what had happened in the day, the final effect of the stories was not comic. I turned Washington into a sign of the dying place. I loved him, and I could feel his affection for me. Yet when I thought of the disease that afflicted New Hampshire, I knew that my grandfather’s face was the exception to disease. The face of sickness was the mouth and moving beard, the ingenious futility of Washington Woodward.

It was a paradox, for he hated corruption and spied it everywhere like a prophet. Yet unlike a prophet he retired from corruption to the hills, meditated it, and never returned to denounce it. He bought a few acres high up New Canada Road, on Ragged, in 1895. He lived there alone, with few forays into the world, for more than fifty years until he died.

I have seen pictures of him, in the farmhouse gallery, taken when he was a young man. He was short and muscular of body, handsome and stern, with a full black moustache over a down-curved mouth. I remember him only as old, for even in my first memories he must have been nearly seventy. The image I retained had him bent nearly double from the waist, with quick bright eyes and his mouth jiggling his beard in an incessant monotone.

Variations on the theme/story of Washington Woodward appear in a number of Hall’s books, as he recalls the past, his life in New Hampshire. It’s like a piece of hard, sweet candy that he continues to roll slowly around in his mouth, bringing it all, eventually, to its essence perhaps. Refashioning it. In this instance, finally reducing, story, language, and style in his children’s book rendition of the tale: THE MAN WHO LIVED ALONE, beautifully illustrated by Mary Azarian.

It begins in this fashion:

“He built himself a camp on the side of Ragged Mountain
and lived there alone, in one big room where he kept
the things he collected—
thousands of rusty nails which he found and
straightened and saved,
pelts from deer that he shot,
old newspapers in a stack,
old clocks piled everywhere,
and wasps’ nests hanging from railroad spikes.” 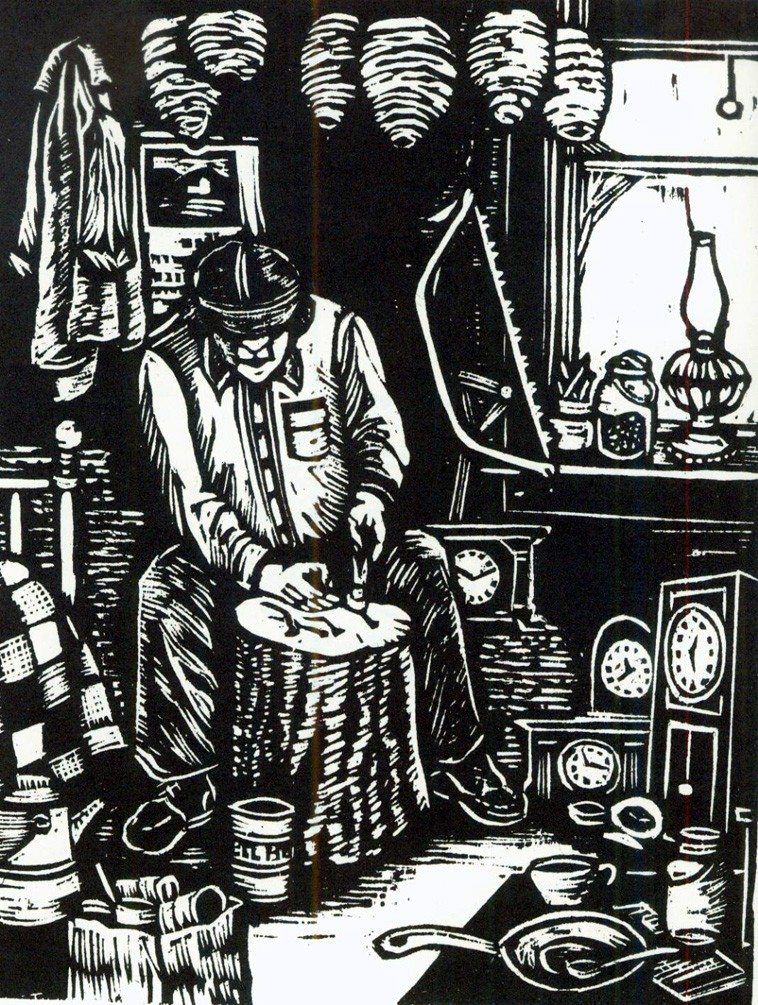