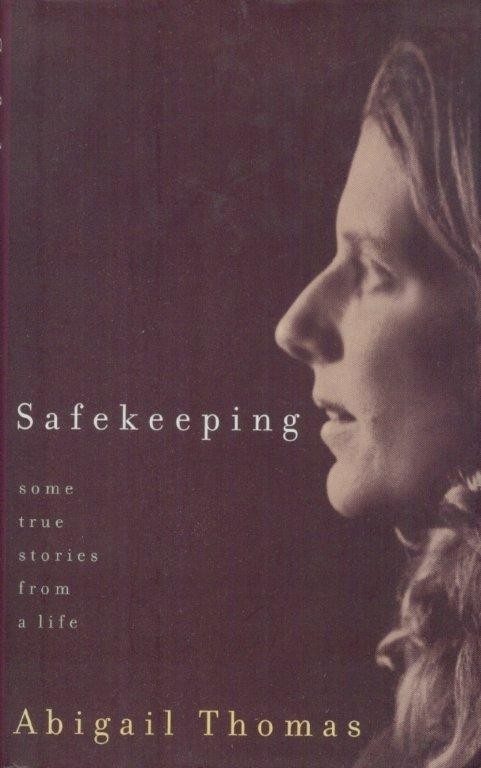 My mother said to me, “Your father likes to think he is personally responsible for the sunrise. He thinks that if he didn’t stand in front of the window every morning and supervise, the sun would never come up. What he doesn’t know,” she went on to say, “is that he couldn’t do any of it if I didn’t get up first and make the coffee and open the curtains.”
For the longest time that was the definition of” “marriage” for me.

I can’t explain it, I say.
My sister says, There were shops. You could have bought some.
I can’t explain it, I say again. I didn’t wear any. I wasn’t happy about it. It’s just the way it was.
Why, why, why, asks my sister. How could you have gone out into the street in a miniskirt?
How could I have done it? It gave me a focus. Instead of thinking about how I had no education and no job ex­perience and couldn’t type and had no husband and three kids and no future that I could even begin to imagine, in­stead of that I could focus on Jeez here I am with no un­derwear again. Better stand up straight.
I don’t think that’s it, says my sister
Maybe I Just wanted the attention, like a six-year-old who knocks the lamp off the table while his folks read the paper. Very childish. I agree completely. How about that? Does that hold water?
My sister shakes her head. No, she says, but her voice is patient. What do they want, she asks, those young girls who are so promiscuous?
I don’t know, I say.
Yes you do, says my sister. What are they looking for?
I don’t know, I say.
Yes you do, says my sister.
Love? I ask.
Right, says my sister. That’s right.
Looking for love in all the wrong spaces? I say, laughing.
And that’s all they think they have to offer, says my sis­ter. You have to say that.
But of course, I say. That’s so obvious.
Well you have to write it, says my sister.
Okay, I say. I will. I went around with no underpants. It was like a big advertisement. Here. This is all I have to of­fer. Check it out. And everyone who showed any interest I followed home. There. Are you satisfied now?

To Keep Him Company

The night my father fell and couldn’t get up and my mother couldn’t get him up not being strong enough and it was four in the morning, they didn’t want to disturb anyone at that hour by telephoning for help. So she lay down beside him on the floor and stayed with him until morning.

Not Meaning to Brag

I remember one summer I was slim enough to wear a yellow polka-dot two-piece bathing suit, and still, I could see him looking sadly down the beach like a dog on a rope. No matter what, there was still only one of me.
Which later he regretted taking so long to find out.

What is this, my sister asks again.
It’s an explanation, I answer.
An explanation?
It’s an apology, I say.
An apology?
It’s a present, I say.

You died, and the past separated itself from me like a con­tinent drifting away.

Like a trick floor. Somebody has tilted it and I have slid into the new year but you remained behind. Last night I dreamed you’d moved to California and I’d forgotten to get your number. Forgotten to call you. I was just starting to make a few inquiries when suddenly you returned, thinner and happy. I was glad to see you looking so well, although I worried about the weight you’d lost. “I’ve been trying to call you,” I began to say. “I’ve been home all along,” you said, “although last night might have pre­sented problems.” By which I knew you had fallen in love with somebody. You were so calm. And then this morning your ashes are still here, in a box on my bookcase.

You had a certain way of saying my name. It was the in­flection maybe, something you put into those three sylla­bles. And now you are gone and my name is just my name again, not the story of my life.