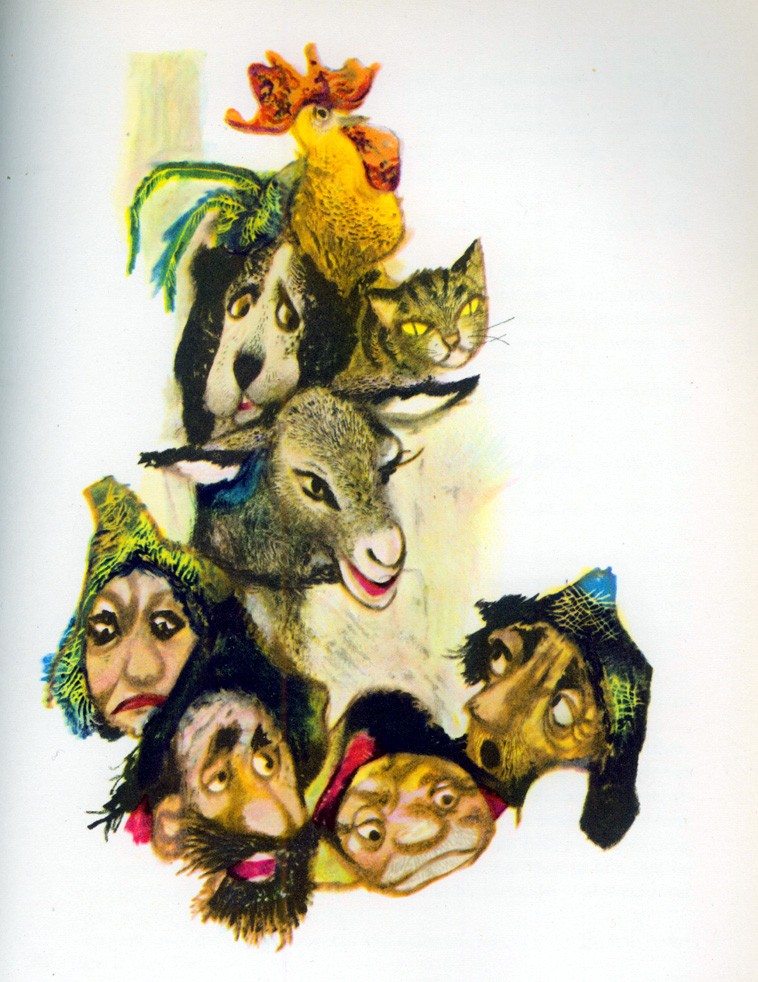 This quickly follows yesterday’s ONCE UPON A TIME #4 concerning the origins of the short story, “The Old Woman’s Preserves” since I thought it might be helpful for readers and writers to immediately associate the whole “original storytelling” process with one of the classic tales gathered by the Brothers Grimm in their attempt to preserve the folk and fairy tales in their time. (This also happens to be one of my favorites).

Here again, all the characteristics of the traditional tale come to life in this story.

I am aware too, that some readers are having problems reading the text (white n black) and others, no doubt, may find the ‘story’ mission of this site too long to deal with considering whatever materials I decide to present.. My apologies, if this is the case. I tried to explain this possible problem of occasional story-length in the opening essay. However, there are times I can’t get around it and ask for the reader’s patience in pursuing the narrative. I will also try my best to find/work with stories no longer than a few pages—whenever possible.

However, if it all becomes too much of a hassle, I may just abandon this whole pursuit and save it for conversation among writer friends and future students.

Monsieur K and I also suggest, for readers having trouble with the white-on-black text, that the text be highlighted, and the type-size made larger to make it easier on the eyes.–Norbert Blei

Once upon a time a man had an ass which for many years carried sacks to the mill without tiring. At last, however, its strength was worn out; it was no longer of any use for work. Accordingly, its master began to ponder as to how best to cut down its keep; but the ass, seeing there was mischief in the air, ran away and started on the road to Bremen. There he thought he could become a town-musician.

When he had been traveling a short time, he fell in with a hound, who was lying panting on the road as though he had run himself off his legs.

‘Well, what are you panting so for, Growler? said the ass.

‘Ah,” said the hound, ‘just because I am old, and every day I get weaker, and also because I can no longer keep up with the pack, my master wanted to kill me, so I took my departure. But now, how am I to earn my bread? ‘

‘Do you know what,’ said the ass, ‘I am going to Bremen, and shall there become a town-musician; come with me and take your part in the music. I shall play the lute, and you shall beat the kettle-drum.’

The hound agreed, and they went on.

A short time after they came upon a cat, sitting in the road, with a face like three rainy days.

‘Well, what has been crossing you, Whiskers?’ asked the ass.

‘Who can be cheerful when he is out at elbows?’ said the cat. ‘! am getting on in years and my teeth are blunted, and I prefer to sit by the stove and purr instead of hunting round after mice. Just because of this my mistress wanted to drown me. I made myself scarce, but now I don’! know where to turn.’’

‘Come with us to Bremen, “ said the ass.

‘You are a great hand at serenading, so you can become a town-musician.’

The cat consented, and joined them.

Next the fugitives passed by a yard where- a cock was sitting on the door, crowing with all its might.

‘You crow so loud you pierce one through and through,’ said the ass. ‘What is the matter?’

‘Why! didn’ t I prophesy fine weather for Lady Day, when Our Lady washes the Christ Child little garment and wants to dry it? But, notwithstanding this, because Sunday visitors are coming tomorrow, the mistress has no pity and she has ordered the cook to make me into soup, so I shall have my neck wrung tonight. Now I am crowing with all my might while I have the chance.’

‘Come along, Red-comb,’ said the ass; ‘you had much better come with us. We are going to Bremen, and you will find a much better fate there. You have a good voice, and when we make music together there will be quality in it.’

The cock allowed himself to be persuaded, and they all four went off together. They could not, however, reach the town in one day, and by evening they arrived at a wood, where they determined to spend the night. The ass and the hound lay down under a big tree; the cat and the cock settled themselves in the branches, the cock flying right up to the top, which was the safest place for him. Before going to sleep he looked round once more in every direction; suddenly it seemed to him that he saw a light burning in the distance. He called out to his comrades that there must be a house not far off, for he saw a light:

‘Very well,’ said the ass, ‘let us set out and make our way to it, for the entertainment here is very bad.’

The hound thought some bones or meat would suit him too, so they set out in the direction of the light, and soon saw it shining more clearly and getting bigger and bigger, till they reached a brightly-lighted robbers9 den. The ass, being the tallest, approached the window and looked in.

‘What do you see, old Jackass?’ asked the cock.

‘What do I see? answered the ass, ‘why, a table spread with delicious food and drink, and robbers seated at it enjoying themselves.’

‘That would just suit us,’ said the cock.

‘Yes; if we were only there,’ answered the ass.

Then the animals took counsel as to how to set about driving the robbers out. At last they hit upon a plan.

The ass was to take up his position with his forefeet on the window-sill, the hound was to jump on his back, the cat to climb up on to the hound, and last of all the cock flew up and perched on the cat head. When they were thus arranged, at a given signal they all began to perform their music: the ass brayed, the hound barked, the cat mewed, and the cock crowed; then they dashed through the window, shivering the panes. The robbers jumped up at the terrible noise; they thought nothing less than that a demon was coming in upon them, and fled into the wood in the greatest alarm. Then the four animals sat down to table, and helped themselves according to taste, and ate as though they had been starving for weeks. When they had finished they extinguished the light and looked for sleeping places, each one to suit his nature and taste.

The ass lay down on the manure heap, the hound behind the door, the cat on the hearth near the warm ashes, and the cock flew up to the rafters. As they were tired from the long journey, they soon went to sleep.

When midnight was past, and the robbers saw from a distance that the light was no longer burning and that all seemed quiet, the chief said:

‘We ought not to have been scared by a false alarm, ‘ and ordered one of the robbers to go and examine the house.

Finding all quiet, the messenger went into the kitchen to kindle a light, and taking the cat^ glowing, fiery eyes for live coals, he held a match close to them so as to light it. But the cat would stand no nonsense; it flew at his face, spat and scratched. He was terribly frightened and ran away.

He tried to get out by the back door, but the hound, who was lying there, jumped up and bit his leg. As he ran across the manure heap in front of the house, the ass gave him a good sound kick with his hind legs, while the cock, who had awoken at the uproar quite fresh and gay, cried out from his perch: ‘Cock-a-doodle-doo.’

Thereupon the robber ran back as fast as he could to his chief, and said:

‘There is a gruesome witch in the house, who breathed on me and scratched me with her long fingers. Behind the door there stands a man with a knife, who stabbed me; while in the yard lies a black monster, who hit me with a club; and upon the roof the judge is seated, and he called out, “Bring the rogue here “ so I hurried away as fast as could.’

Thenceforward the robbers did not venture again to the house, which, however, pleased the four Bremen musicians so much that they never wished to leave it again.

And he who last told the story has hardly finished speaking yet.

Stories I Ain’t Told Nobody Yet